Digitalization is everywhere today. Companies are coming out with offers ranging from point solutions to platforms. They take the form of sensors, software, wearables, robots, and mobile phone applications. There are many technologies, but above all, they need to solve a problem.

Predictive Maintenance is attractive to many companies because it has a fast ROI. Refineries can immediately see the condition of their assets.

Within the last five years, there has been a shift in technology that makes online, real-time predictive maintenance more accessible. Wireless sensor prices have dramatically dropped, cloud computing provides scalability and data storage, and advances in machine learning increase the analytical power to make sense of all the data. This means valves, rotating equipment, electrical panels, and other semi-critical assets can be monitored.

While unplanned downtime is usually the primary driver for wireless PdM, it can have significant impact in reducing safety risk. In general, there are four scenarios that are frequently identified where real-time asset information can lead to safer operations.

The most dangerous time for a refinery is when it’s in transition. According to a 1998 study of 500 safety incidents, “A typical refining or petrochemical facility will spend less than ten percent of its time in transient operations — yet more than 50% of process safety incidents occur during these operations.” One of the reasons for this is that people spend most of their time in normal operating conditions, and they are not practiced enough in the “unusual” conditions. Tens of thousands of procedures are performed during a refinery turnaround and errors in one of these could cause serious safety incidents.

The deadliest refinery accident in the US happened at BP Texas City in 2005 during the restart of the hydrocarbon isomerization unit. Multiple explosions and fire caused 15 deaths and 180 injuries. According to an investigation by the Chemical Safety Board (CSB), there were many cultural, equipment, safety and human causes.

Planned maintenance (PM) tasks are often set by OEMs or a criticality analysis. Sensorizing assets and being notified of any changes allows maintenance teams to extend the intervals between PMs.

For example, instead of rebuilding a pump on a schedule, real-time asset condition can lead to rebuilding it only as needed. This results not only in a significant cost saving, but also a reduction in “unusual situations” and thereby increase in safety.

Reliable operations with minimal shutdowns and startups for maintenance activities is a major contributor to reducing safety incidents.

In 2017, there were at least 33 fires, explosions and chemical releases at U.S. oil refineries and industrial plants. After the BP Texas City explosion, OSHA officials found that oil refineries accounted for more worker deaths than any other industry category. 70% of citations were process safety related.

Most O&G facilities have protection systems on critical assets and periodic walkaround condition monitoring programs for semi-critical assets. Even with well-developed reliability programs, accidents happen. By increasing the number of Balance of Plant (BOP) assets being monitored, operational reliability improves as does safety.

Every facility has assets that are inaccessible or dangerous to get to with walkaround vibration monitoring equipment. For example, areas where machinery is gummed up with hydrocarbon residue or monitoring cooling tower equipment. Accidents can cause burns or death. Instead of risking human lives for inspections, many companies can easily justify installing permanent sensors on these assets. They can regularly get data on asset condition without crawling around hazardous equipment.

This is especially relevant to operators with distributed assets like a midstream compressor station. One pipeline operator shared that the immediate benefit from continuous wireless sensors and real-time asset information was that he didn’t have to dispatch service personnel to check on the condition.

As a major operator in Colorado, the winter months bring heavy snowfall, which can mean dangerous conditions for inspection.

The gas plant that the pipeline supplied wasn’t receiving enough feedstock, and a technician was sent out to inspect it. He got into an accident due to the road conditions. Instead, had sensors been monitoring the compressor health, he could have been notified earlier, resulting in better scheduling under safer conditions.

Most refineries put in place condition monitoring because the costs of lost production can be millions of dollars per day. A failure in a production-critical asset has huge consequences, and maintenance teams want to see asset condition in order to predict and prevent unplanned shutdowns.

The side benefit of safety could be argued to be the primary benefit. Ultimately, better running machinery means improved safety. The consequences of failure are often so high, that preventing one safety incident could pay back the entire system. The OSHA fine alone for Texas City explosion was $50.6M. This doesn’t include the civil suits and other money BP is spending to improve working conditions.

Real-time asset condition provides transparency across the entire facility so everyone from maintenance technician to plant manager can see what is happening in the refinery. Operators are immediately notified of the earliest changes in asset condition and can see condition anytime, anywhere.

Collecting more data means that someone needs to analyze it. One company collected 1.4M readings with permanent wireless sensors, compared with 5,000 that an analyst would have collected in the same six months. The sheer volume of data would be unmanageable for a team of analysts used to collecting data every few weeks.

Machine learning algorithms can sort through huge quantities of data, acting as an assistant to the analyst. They can create a single, trendable asset health score that flags problem assets.

Continuous sensors can go beyond predicting health to optimize asset performance. By correlating asset conditions with process conditions, the system can identify abnormal variations before it causes problems in mechanical equipment. One example is pump optimization.

Periodic monitoring of vibration alone will not determine whether it is operating below BEP. Instead, multiple parameters such as pressure, acoustics, flow, vibration, and more are needed to understand performance.

There has been an explosion in available digital technologies. Refineries that are putting in place digitalization initiatives should start with their business goals to understand the best application of technology. When it comes to asset reliability, real-time information can increase predictability, reduce costs, and most importantly, save lives. Hindsight is always 20/20 and digital refineries have the opportunity to put in place technology that changes the term “hindsight” to “foresight”.

Schedule a demo to see how Petasense’s Asset Reliability & Optimization system can increase safety and reliability. 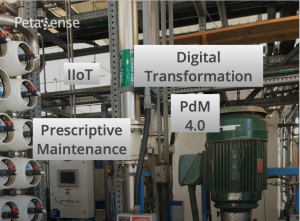